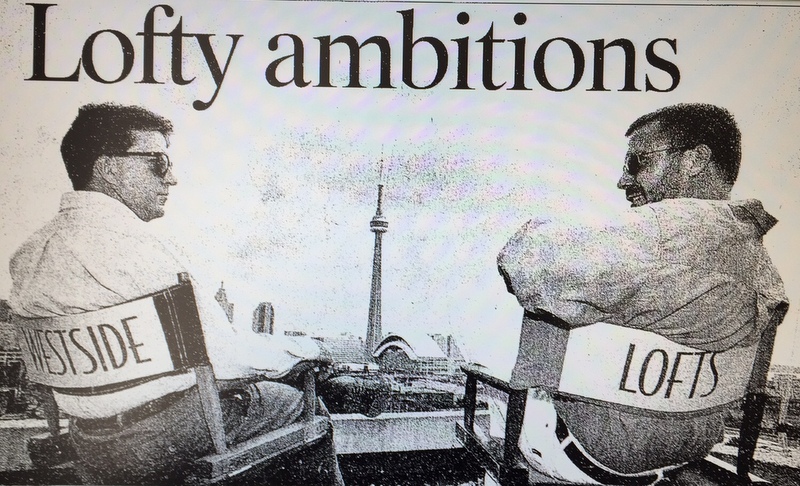 This 1997 photo shows the developer, Mark Partin, and the interior designer, Mike Niven, on the roof of Westside Lofts.

Westside was announced as a 210-unit loft conversion project “at the corner of King and Bathurst, a neighbourhood in transition….dusty old commercial and industrial buildings slowly making way for trendy loft condominiums and small infill projects”. The developer described it as “..the New West Side, or the Lower West Side, if you want to use New York terminology.''

Westside featured all the requisite loft features: unusually high ceilings (almost 12 feet in height), gigantic windows with views of the city skyline or the lake, large spaces and exposed structural columns and ductwork.

The Toronto Star referred to his use of warm colours an natural materials including sisal carpet and light wood cabinets. It also referred to the use of corrugated cardboard on walls.

Westside is all about variety. There are angles and assymetrical lines everywhere; grounded and calmed by natural  wood on doors, trim and millwork; neutral sisal carpets (that used to be in the hallways), and an earth-toned colour palate (brick red and natural stone) which used to carry from the exterior of the building inside to the hallways. This formed the canvas on to which the designer then applied a creative intermix of decorative surface materials and finishes in great abundance and variety – the effect was intended to be raw, quirky, and whimsical but the materials are all of very high quality.

There are some direct allusions to the previous life of the building as a manufacturing warehouse and creative arts hub. The exterior features the shadow of a listed heritage building and an iconic clocktower. The entrance features raw industrial design motifs including a massive wave wall that appears to be made of corrugated cardboard (something that Mike Niven was known to experiment with), a floor inset of corroded metal, and a massive rough painted and textured wall. The lighting in the entrance and elevator lobby, and the vestibules on each floor, is both subdued and dramatic, creating a sense of arrival at a private place that is creative and different.  In 2009 the hallways were renovated, without consideration of the original design vision. The hallways which were originally painted in the same brick red and natural stone colours as the exterior, were drastically altered. The sense of continuity and flow from the outside to the inside was lost.

In November, Westside was lauded as “a huge recycling project” by architect Drummond Hassan, partner with Young + Wright. "The thing to remember is that the elements that are being recycled are really large…There's a staggering amount of concrete, the precast, the elevator system, the stairs and freight elevator. It's not often that you find a condo conversion project in a building that's little more than a decade old. The building is very precast '70s in style, but it was built in '87…….We're all survivors, including that building. It wasn't a fabulous building to start with, but it's turning out to be an excellent addition to the fabric down there. And the commercial and industrial standards that governed its design should prove advantageous for future owners. For example: There are four elevators serving 210 units, plus a freight elevator (there were originally two) with a loading dock. You'll never have to wait - people moving in can use the freight elevator…You can bring your Harley upstairs....Concrete floors are 12 inches thick, 15 inches in some places. In residential projects, the floors are usually 7 inches thick. The ceilings are 12 feet high. There are storage lockers in the centre of the building on each floor. Occupants will be able to store belongings just outside their door and the lockers are big - more than enough space for a Harley. The nature of the building allowed flexibility in adjusting plans and locating units where buyers wanted…buyers are getting a solid concrete frame building and solid concrete floors."

The Developer filed for bankruptcy in Feb 2001 when the building was 95-per-cent complete. Condo conversions are not covered under the Ontario New Home Warranty Program. Deloitte & Touche, the court-appointed receiver, finished the sale of some remaining units to finance the remaining construction.  But the money raised from the sales went to pay construction liens, and the remainder was used to comply with city orders dealing with safety issues. Deficiencies in individual units became the responsibility of the owner. Residents set up various committees to decide how to deal with unfinished common areas.

In 2003 Christopher Hume (the architecture critic for the Toronto Star) wrote a scathing review of the Westside building and its conversion to lofts, calling it a “banal blight on King West….this is a building that sums up the architecture of anonymity with which our cities abound. It is a structure that could be anywhere. The most distinguishing characteristic is a clock tower that faces the intersection. It was intended to replace an earlier- and infinitely more attractive - clock tower that was demolished to make way for this building. Since then, however, 700 King has undergone a dubious remake clearly intended to add a measure of appeal to a slab that had none. After all, now that it's residential, it should look like something more than a dreary commercial pile remarkable for the cheapness of its materials and the banality of its design. In its refurbished version, this is a mid-rise box with a two-storey base now covered in red-brown stucco. Above that, it's prefab concrete and horizontal rows of windows. At street level, it's all retail; there's a corner Second Cup as well as a McDonald's that boasts some of the ugliest outdoor furniture imaginable. Even in winter, it's right out there on King for everyone to see and admire. The simple and solidly box-like massing of the tower doesn't help much, either. It makes the building appear too large for its site so that it looms over the 19th and early 20th-century architecture that surrounds it.”

In 2003, Sheena Sharp, Associate Young + Wright Architects, came to the defense of Westside.“For the record, 700 King Condominiums is an adaptive reuse of an existing structure that was not good-looking but was sound and its re-use was a good move from an environmentally friendly point of view. Its units, which were quite affordable, won awards for innovative design and its common spaces are quite attractive. Unfortunately, the developer went bankrupt and as a result the landscaping is minimal.”

A member of the public wrote: “Building was a conversion. While it can be argued that this towering box overlooks historical buildings, let's not lose sight of the fact that it is a conversion building and not new construction. I believe 700 King's art deco style is infinitely more appealing that the abandoned commercial wasteland that stood beforehand. The architecture, if not appreciated at the exterior King St. W. level, will surely be appreciated if you bothered to take the time to see the outstanding interior designs and finishes. It's no great mystery that the demand to live in this building, and resale values, continue to be strong.”

Another wrote: “700 King should be commended for its evolution, not criticized as a blight. It may be no beauty spot on the Toronto condo scene, but Christopher Hume's critique is without proper context. The building was lifted out of the ashes in 1997, and has acted as a primary catalyst for what is now the vibrant residential community of King West. While I wish further upgrades were done to its exterior, Hume failed to recognize its evolution: what was once a vacant industrial slab on a desolate intersection is now a breathing cornerstone attracting new retail, pedestrian, and urban activity. 700 King should be heralded as a great example of downtown revitalization, not absolutely dismissed as a blight.”

In 2014, Robert Hill of Toronto’s KPMB Architects highlighted the importance of clocktowers in the Toronto Star article, “Civic Grandeur Striking in ClockTowers.”

“These sentries of time have stood tall for decades, serving as landmarks in space and time and symbols of civic grandeur. Clock towers remain a well-used architectural flourish…It’s a fitting and appropriate symbol of civic government and civic pride. These towers are part of our rich architectural heritage in Canada extending back into the mid 19th century, and this tradition is continued today.”