Otto Higel Co. Ltd. had amalgamated with Augustus Newell & Co to manufacture piano actions, keys and hammers, and organ keys, reeds, and reedboards. Higel was a master craftsman and they had one of the finest machine-shops in Canada. The quality of their product eclipsed that of French and German manufacturers and the business expanded rapidly as they developed a worldwide market. Higel had to bring in extra workmen from New York.

They commissioned Gouinlock and Blake to enlarge the building so they could keep up with the tremendous rush of orders. The original structure was extended north along Bathurst to the corner of Adelaide Street West. The addition was long and narrow with high ceilings and large windows to bring in natural light.

The company made a big splash at the 1901 exhibition which featured a Newell & Higel piano action and key standing over six feet high and a souvenir handout -- “a neat maple leaf in green celluloid with pin, emblematic of patriotism, and a reminder of all of the success gained by a purely Canadian firm.” 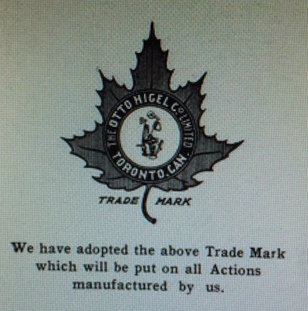 Higel purchased the firm's assets in 1904 and restored the name Otto Higel Co Ltd, but also used Canada Piano Action and Key Co Ltd. At the time, King Street was recognized as one of the finest industrial highways on the continent with many large and prosperous companies along the street. 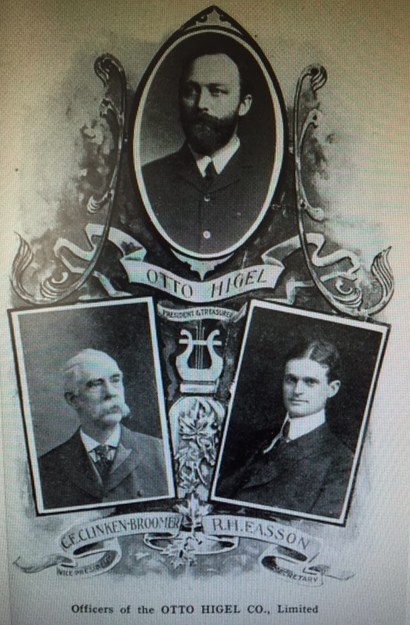 Higel began manufacturing player-piano actions in 1906; this brought him the greatest success. 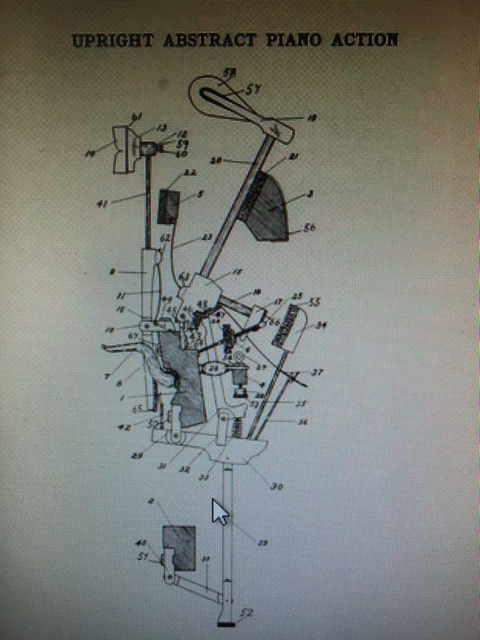 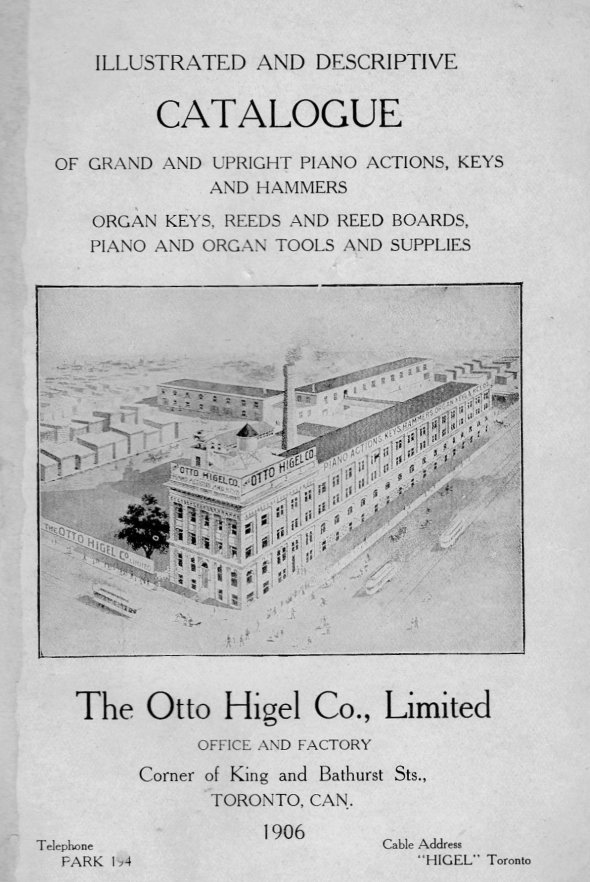 Higel commissioned the architect G.W. Gouinlock to design a house for him at 136-146 Dowling Avenue near King Street West (since destroyed). In 1907 he  commissioned G.M. Miller Architect to undertake a second expansion of the property at 680 King West which included a clock tower. In 1908 the company lighted the clocktower during the nights of the annual exhibition. Afterwards people in the vicinity of King and Bathurst asked the city and the company to light the clocktower year round “as there is not another lighted clock within a mile." By 1910, the clocktower was illuminated. “The timepiece is appreciated by the neighbourhood and the thousands who daily pass the building; this has been demonstrated by many people who have forwarded the firm commendatory letters thanking the company for their enterprise in this respect…”

The Growth of the business was phenomenal. Higel commissioned G.M. Miller Architect to do a third expansion, this time to accommodate a new department for the cutting of perforated piano rolls, called Solodont. Another floor was added to the entire building and another building was added to the west of the structure. The new addition was 200 x 90 feet bringing to 100,000 square feet the total factory floor space. By 1912 Otto Higel employed 450 workers at his factory at Bathurst and King 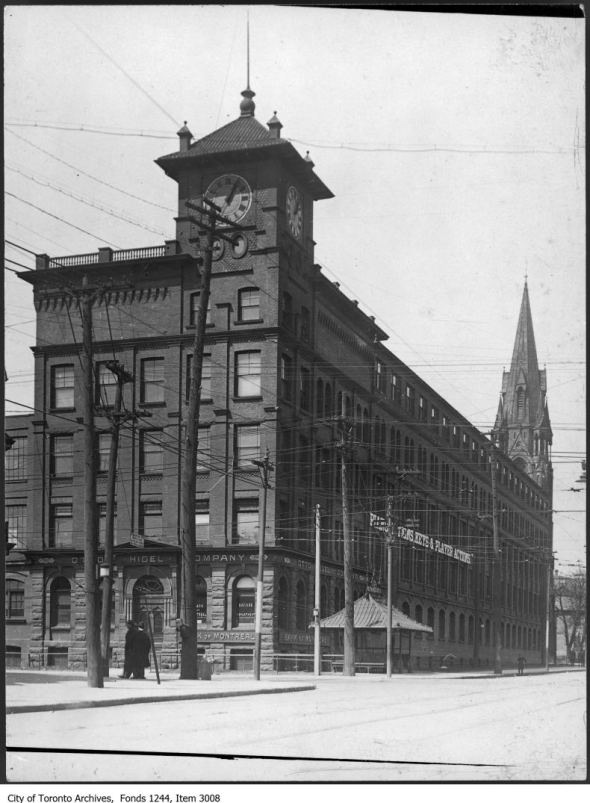 Player pianos with Higel actions were in use around the world and were in such demand that a second plant was opened in Buffalo, NY, ca 1914, and a third in New York City in 1916. Otto Higel bought twenty-one lots in the East Bronx and built a 3-storey factory for the exclusive manufacture of the company’s patented Metalnola player action. The same year he patented the Electrola trade mark

By 1921, the economy was beginning to fail. The US arm of the company had capital of $500,000; outstanding obligations of $328,000 and assets of upward of $600,000 but lacked sufficient money to meet obligations. In early 1922 the New York factory went into receivership and in January 1923 the operation was liquidated with an auction of “the entire plant, machinery, fixtures con/tents, all assets and patents of the Otto Higel Company.”

By 1925 Otto Higel and Co. was hailed as the most important piano supply house in the British Empire. That year, Otto's wife Selma died and he remarried Emma Oldschwager, the widow of George Medland Arnold. It was reported in the papers that Otto enjoyed horseback riding and the Company sponsored a baseball team in Toronto. In 1926, the company began to promote its new Higel Radio receivers – both cabinets and table models.

Business was booming but the pace of work resulted in three industrial accidents at the Higel factory, reported in local papers. A woman was almost strangled when her apron blew into the grip of a rotating pulley. A man severely injured his hand while drilling and another got his hand caught in a machine.

By 1928, manufacturers were beginning to grumble about the high taxes and threatening to leave the city. At the same time, neighbouring municipalities were trying to entice manufacturers to relocate. In April 1928 the Toronto Star reported that Otto Higel had pulled out of a deal to build a factory in Richmond Hill. In February 1929 it was revealed that the Company had decided to move Quebec because of tax incentives.”

By April 1930 Otto Higel had plans to build a plant in Brampton. In May, he demolished the old St. Mark’s Presbyterian Church (which for 20 years had housed the Westwood Machinery Company) on the north-east corner of King and Tecumseh. He planned to sell it to a prospective buyer but in July Otto Higel died unexpectedly. His son Ralph O. Higel took over the business.

On Higel's death his son Ralph O. Higel assumed direction of the company, which gradually began making other products, such as cabinets and wooden toys.

Other businesses rented space in the building. In 1936 there was an explosion that “rocked the building,” caused by a fur cleaning machine in the plant of A. Hollander and Sons, which left a female employee critically burned.

By 1938 control had passed out of the Higel family, though the name was retained. After 1938 the firm apparently made only kitchen cabinets and appliances.

In 1943 there were four businesses in the building when a fire was extinguished causing heavy loss due to water damage.

In 1944 the business ceased but the building continued to be leased out to other companies. Otto Higel’s widow died and his son Ralph retired to Montreal.