The buildings became run down and could not attract good tenants. Artists and designers moved in to live-work studio spaces in the old warehouse that was now known simply as “The Clocktower Building”.

In 1979 the Lands and buildings at 680 King Street West (Toronto Lithographing Company) received historical designation as a property of architectural value or interest under the Ontario Heritage Act.

“The unusual clock tower is a landmark in the City and rises six floors above the corner building with rock faced ashlor stone on the first floor and brick pilasters extending to the cornice between the paired windows above. The arched south entrance has a finely detailed pair of panelled wood doors with glazed transom.” 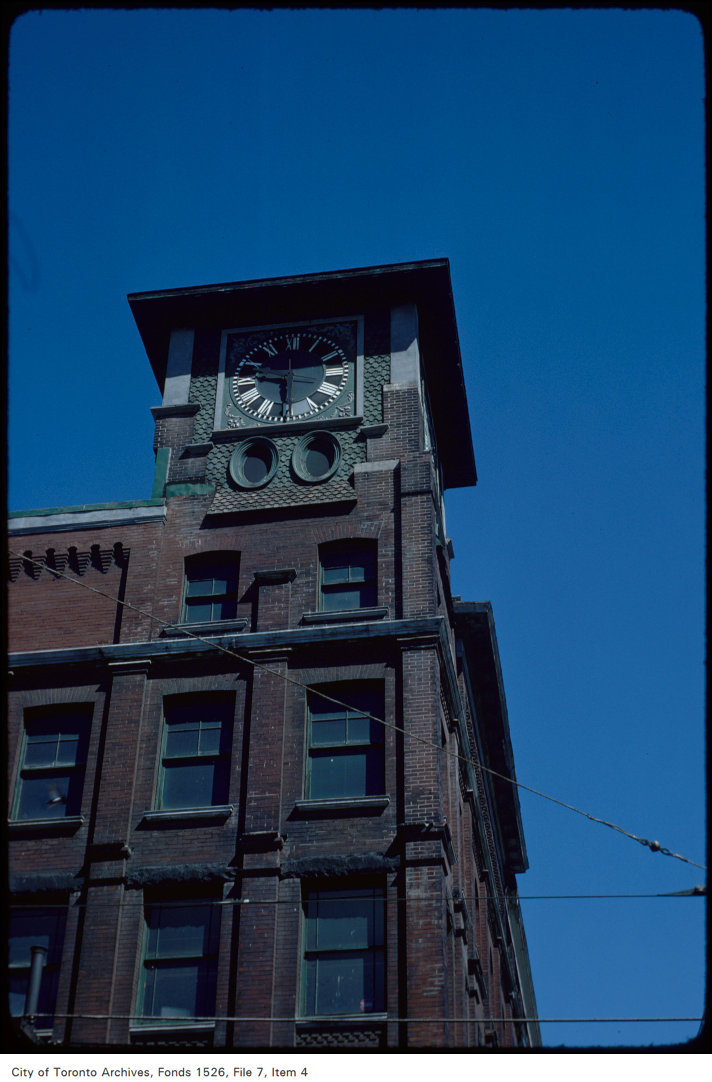 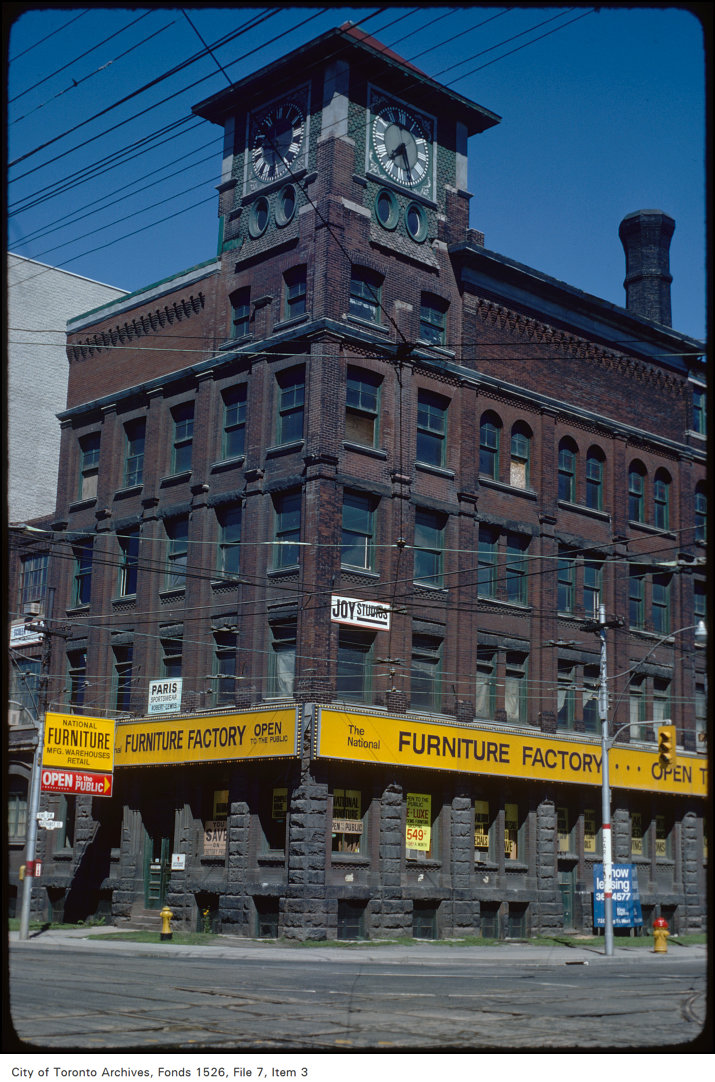 In 1980 artists and designers were evicted from the Clocktower Building to allow for its demolition. The Clocktower Building, like 2 Berkeley Street, were incredible hives of creative activity and were lost to the wrecker’s ball or condo conversions. See Patrick Cummin’s photo album of the building just prior to demolition

In negotiations with the City and the Historical Board, the developer agreed to restore and preserve the original clocktower within its corner structure.

In October 1981, The developer commenced demolition of the structure around the historic clocktower without structurally securing it first. The intersection of King and Bathurst was closed to traffic and pedestrians for several days because the clocktower was in danger of collapsing. The building was declared unsafe and ordered demolished by Toronto’s building commissioner. “It was designated historical, but now it’s not possible to save it. He said the owners, Murhal Developments, hoped to save the façade and clock tower of the four-storey building but then cracks appeared in the bricks.”

Headlines declared “Wreckers got another landmark!” In December 1981, the Clocktower was dismantled and put into storage. 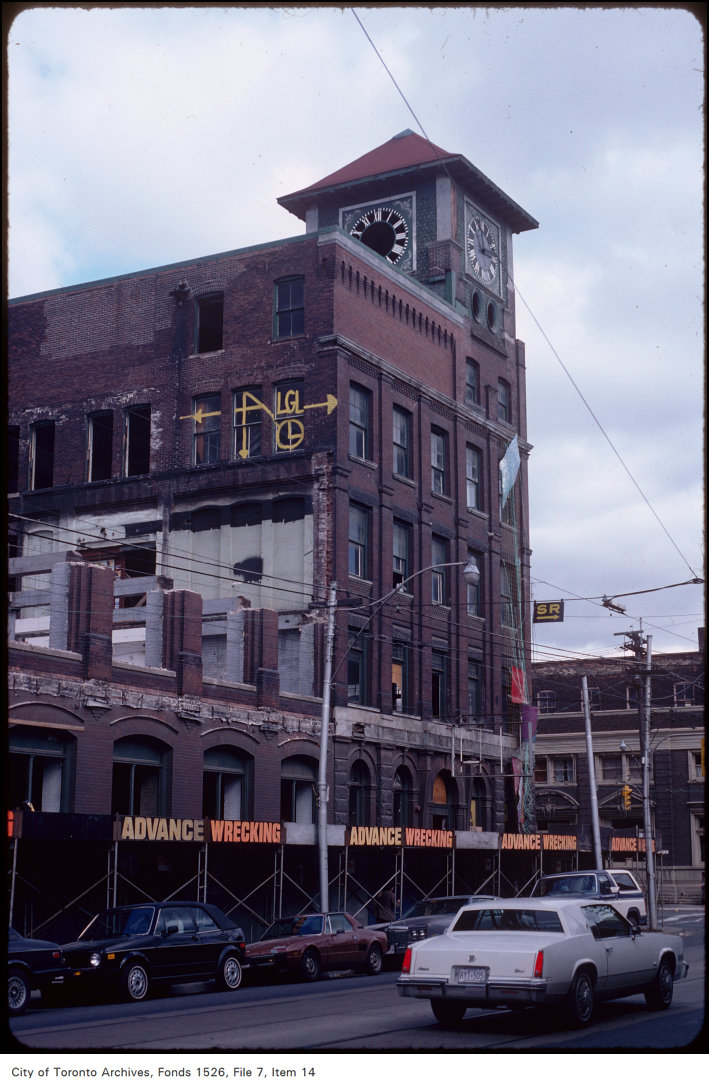 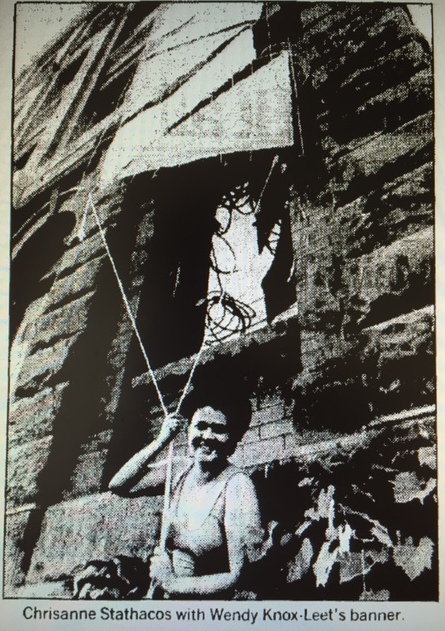 In May 1981, A Space, an artist-run centre, got permission from Murhal Developments to stage an art exhibition called the Terminal Building Project in the Clocktower Building. This show invited artists to use the abandoned building as a gallery. 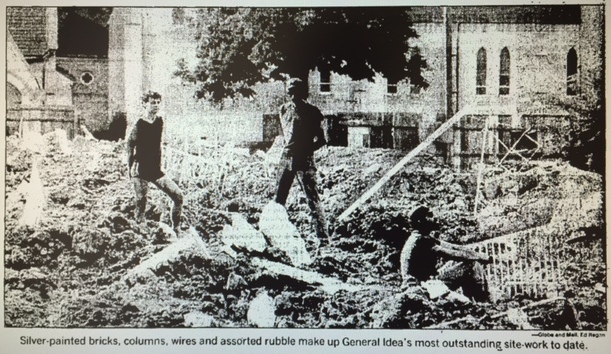 It featured an installation “Toronto’s Fault: The First Tremors (The Ruins of the Silver Bar from the 1984 Miss General Idea Pavilion)” by General Idea, a world-famous collective who were active from 1967 to 1994. “Working with tons of land-fill which had been piled in the parking lot inside the building's elbow, and with hundreds of silver-painted bricks, columns, wires and assorted bric-a-brac found in and around the structure, the three artists of General Idea (AA Bronson, Felix Partz, and Jorge Zontal) have created a marvellous semblance of an earthquake site. Viewed as artistic composition and invention, First Tremors is a sensationally beautiful, vast Dada painting, swarming with silvery forms on a brown field, suddenly thrown up into three dimensions and transformed into real landscape. Implanted within the real factory about to fall before cultural force is this marvellous fictional anecdote about a chic bar knocked down by an earthquake: the most complex, perfect matching of work to site, fiction to fact, myth to reality, history to nature since Robert Smithson's Spiral Jetty. But, according to GI artist Felix Partz, the work should also be seen as a prophetic herald of what could happen to the myth of Toronto the Trendy, a fiction that could be demolished this summer along with the building at King and Bathurst.” 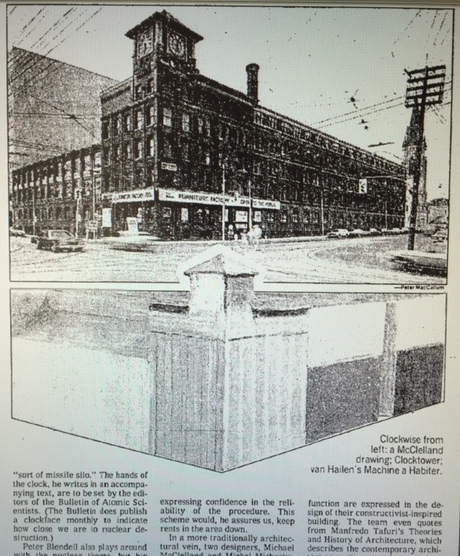 It took more than 5 years for another building to be erected on the site of the demolished Clocktower Building. The new building was designed to house the garment industry but it was not a success. “The timing was off for the original developers. Constructed shortly before free trade, a strong dollar, high interest rates and a deep recession pummeled prospective garment industry tenants, the building was never fully occupied.”