Find the best library databases for your research.
Loading...

January 20, 2020 --  Springer Ebook access errors previously reported within the Databases A – Z, 360 Link and Summon systems have been resolved.  Related updates to the Summon knowledgebase will be visible within 24 – 48 hours and will add approximately 17,000 Springer ebook records to Summon.

September 21, 2020 -- The Library has recently subscribed to Art & Architecture ePortal, an authoritative eBook resource that features important works of scholarship in the history of art, architecture, decorative arts, photography, and design.  It makes key works published by Yale University Press available in digital format along with texts from a number of other publisher, museum and gallery partners such as MIT Press, The Art Institute of Chicago, Yale University Art Gallery, and Harvard Museums. This growing collection of more than 200 ebooks provides unlimited simultaneous user access.

August 24, 2020 – New E-resource Available:  Very Short Introductions.  This collection of 600+ eBooks offers concise introductions to a diverse range of subject areas from Climate to Consciousness, Game Theory to Ancient Warfare, Privacy to Islamic History, Economics to Literary Theory. Titles in this collection provide scholarly overviews to a large range of subjects, written by experts in the field who combine facts, analysis, and original insights to make challenging topics highly readable.  This resource is limited to 1 simultaneous user.

May 15, 2020 - SERVICE DISRUPTION *ENDED*:  The service outage affecting the  Library's proxy sever, EZProxy, has ended.  Off-campus access to all e-resources (ebooks, journals, streaming media)  has been restored.  Users experiencing any residual issues related to the outage are advised to clear their browser cookies & cache.

April 13, 2020 –  ProQuest has made more than 25,000 journals, magazines and newspapers available to the OCAD U community, until July 9th, 2020, to support educators and students in their research during the campus closure.

ProQuest Central is the largest full-text periodical collection available, bringing together more than 40 complete databases across all major subject areas, including Business, Health and Medical, Language and Literature, Social Sciences, Education, Science and Technology, as well as core titles in the Performing and Visual Arts, History, Religion and Philosophy.  This resource also includes thousands of full-text newspapers from around the world including hundreds of Canadian newspapers such as the Montreal Gazette, Regina Leader Post, National Post, The Globe and Mail, Vancouver Sun, and the Toronto Star.

April 9, 2020 – CBC is providing free access, on a provisional basis, to Curio.ca to support students and educators during school closures.

Curio.ca provides streaming access to thousands of educational video and audio programs from CBC and Radio-Canada.  Curio includes documentaries from television and radio, news reports, archival material, children’s programming and more (e.g. The Nature of Things, The Fifth Estate and The National).  Content is updated weekly.  The platform also includes features to support teaching such as resource guides and educator accounts that allow for the creation of shareable play lists.

Academic Search Ultimate is a large multi-disciplinary database that provides a diverse collection of peer-reviewed, full-text journals alongside news, trade and popular magazine content.  This resource includes over 9,000 active full-text journals and magazines.

EBSCO Academic eBook Collection offers unlimited full-text access to a collection of more than 200,000 e-books from a wide selection of publishers including leading academic and university presses.

March 23, 2020 -- In an effort to support educators and students during the COVID-19 pandemic, Bloomsbury Publishing, has provided free unlimited access to all Bloomsbury digital resources to the OCAD University community until May 31.  These resources are accessible from the links below, the Databases A-Z tool and are also discoverable within Summon.

February 2020 – The Informit Indigenous Collection and the Bibliography of Native North Americans are now available to the OCAD U community.  Campus access to these two e-resources has been generously funded until 2022 by the Wapatah Centre for Indigenous Visual Knowledge.

Bibliography of Native North Americans (BNNA) is a bibliographic database which provides extensive coverage of native North American culture, politics, history and life. This resource covers a wide range of topics including archaeology, multicultural relations, gaming, governance, languages and literacy and consists of more than 140,000 citations to books, articles and government documents from the United States and Canada. Dates of content coverage range from the 16th century to the present.

January 6, 2020 – The Library has upgraded its subscription to the Canadian Electronic Library (CEL) to include access to CEL’s Canadian Books Collection.  The Canadian Books collection provides access to nearly 19,000, predominately non-fiction, ebooks sourced from a variety of academic and other Canadian presses such as the University of Toronto Press, Fernwood Publishing, and Dundurn Press.  The Books collection is licensed for single user (1SU) access and is cross-searchable along with the Library’s existing subscription to CEL’s public and health policy collection

December 1st, 2019 -- Library E-Resource Cancellation:  As part of the Library’s ongoing review and evaluation process of subscription e-resource renewals the Library has elected to not renew Business Source Complete (BSC).  OCAD U community access to this resource will expire after January 1st, 2020.

June 28, 2019  -- Library E-Resource Cancellation:  The database Opposing Viewpoints in Context (Gale platform) was not renewed by the Library.  OCADU community access to this resource expires on July 1, 2019.

October 1, 2018 -- The Library has re-subscribed to Criterion on Demand  a streaming video platform that provides access to a growing library of more than 4,000 feature films including classics, foreign films, new releases and documentaries. The collection comprises films from a number of leading production companies such as 20th Century Fox, Paramount Pictures, DreamWorks, Warner Brothers, as well as smaller independent producers such as Mongrel Media.  This collection is licensed for personal research or educational/instructional classroom use only, and films may not be screened for other purposes.

August 30, 2018 --  The Library has re-launched its Kanopy streaming video program.  The new Kanopy films program allows OCAD U students, faculty and staff to view more than 10,000 films from a variety of  broad subject areas such as design, visual arts, and film, gender and indigenous studies.  Films in the collection include training, documentary and feature length productions from a range of producers/distributors such as Criterion/Janus films, Media Education Foundation, PBS, BBC and more.  Films can be accessed via Kanopy directly using the link on the A - Z Databases list or by searching the Library's discovery system Summon.

October 6, 2017 --  E-Resource Cancellations:  AnthroSource, AdForum, Cambridge Journals Online, Film & Television Literature Full-Text, and IEEE All Society Periodicals.  In addition to the previously announced e-resource cancellations, the Library will be cancelling six more subscriptions through the remainder of the fiscal year in conformance with the institutional budgetary Remedial Action Plan.  Descriptions of these resources, alternative resources and subscription end dates are described in detail in Library News.

September 28, 2017 --  Frontier Life:  Borderlands, Settlements, & Colonial Encounters is now available through the library.  This collection of primary source materials has been developed in cooperation with sixteen archives and libraries from around the world and provides access to more than 240,000 images and 8,000 documents from the mid-17th to the early 20th century.   Frontier Life documents the experiences of people living in the colonial frontiers of North American, Africa, Australia and New Zealand.  Indigenous peoples and their encounters with European settlers and their descendants are central themes within the collection 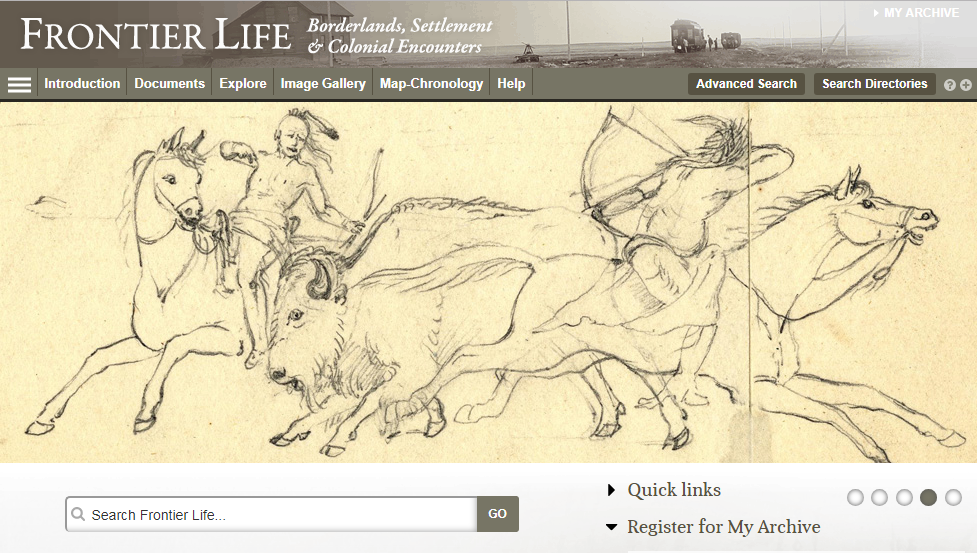 September 14, 2017 -- Library E-Resource Cancellation:  Criterion on Demand (CoD) is a streaming video platform that provides access to a growing library of more than 1500 feature films; including classics, foreign films, new releases and documentaries.

Some of the films in CoD will remain available in physical formats held within the library.  Alternate educational and documentary streaming films are available through both Kanopy and Films on Demand subscriptions.  Criterion on Demand will no longer be available to the OCADU community as of October  2017.

September 12, 2017 --   Library E-Resource Cancellation:  Art Museum Image Gallery (AMIG) provides access to more than 130,000 images of artworks from distinguished museums around the globe. AMIG will no longer be available to the OCADU community as of August  2017.

June 19, 2017 --  Library E-Resource Cancellation:  Oxford Islamic Studies Online.  This resource provides access to more than 5,000 reference and biographical entries, chapters from scholarly introductory works on Islam as well as images, maps and timelines.  The Library will be ending its subscription to OISO as of July 1, 2017.  For further information see the full cancellation notice.

June 1, 2017 *update* -- Ebrary Ebooks is now Ebook Central as of June 1.  As a result of the platform migration process off-campus, and login features were temporarily interrupted on  May 31st and June 1st.  All functionality has since been restored.

May 30, 2017 --  Due to budget reductions the Library is cancelling several subscriptions to academic databases in the months of June and July.  These cancellations include EBSCO Academic Search Premier & Masterfile, Textile Technology Complete, and Literature Criticism Online (LCO).   These resources were selected for discontinuation based upon their decreasing and/or low usage and content overlap with other currently subscribed e-resources. Descriptions of each of these resources, rationale for cancellation, suggested alternatives, and subscription termination dates are outlined in this notice.

October 3, 2016 --  The Library has recently purchased a collection of biomedical ebooks from publisher Morgan & Claypool.  The titles are part of the publisher's Synthesis series and cover a range of biomedical engineering and design topics such as assistive technologies, human factors in computing systems, and body tracking in healthcare. Titles in this series are peer reviewed and intended to synthesize important research or development topics.

August 1, 2016 --  ACLS Humanities Ebook Collection is now available thorough the library.  This resource includes 4,680 full-text, cross-searchable books in the humanities selected by scholars for their continuing importance for research and teaching. Content includes many prize-winning works selected in collaboration with member societies of American Council of Learned Societies and more than 100 publishers.

June 10, 2016 --   The Library is ending its subscription to ProQuest’s RefWorks citation management software effective August 31, 2016.  The decision to end support for RefWorks at OCAD was arrived at after a thorough evaluation of local usage, cost effectiveness, potential impact on our users and the availability of comparable, and free, citation management systems.  It will be necessary for all RefWorks users to back-up and export their data (including all files and citations) prior to August 31.

March 4, 2016 -- Trial Ended.  The library is providing trial access to Kanopy, a streaming video service which offers access to more than 28,000 films, until April 15th.  Kanopy serves streaming films in a wide variety of subject areas such as literature, history, visual arts and indigenous studies.  Films in the collection include training, documentary and feature length productions from a range of producers/distributors such as Criterion/Janus films, Media Education Foundation, PBS, BBC and more.  The Library invites community input on trial resources, please contact us to submit any feedback on this resource.

March 2, 2016 -- Trial Ended. The library is now offering trial access to ProQuest Canadian Newsstand until March 28th.  Newsstand offers access to decades of full text articles from more than 300 regional and leading national newspapers.  This resource provides access to major daily news publications such as The Toronto Star, National Post, and the Globe and Mail as well as local community papers like The Parkdale Villager and Markham Economist & Sun.  Coverage for some titles extends as far back as the early 1980’s, with the majority of title coverage beginning in the early 2000’s.  The Library invites community input on trial resources, please contact us to submit any feedback on this resource.

February 18, 2016 --- The Library has recently subscribed to Canadian Health Research Collection which provides access to a growing health policy and medical research collection of 10,000 ebooks and reports.  The publications in this collection come from an array of respected Canadian research institutes, government agencies and university research centres.

February 16, 2016 -- Films On Demand has launched a new platform which includes significant design and server infrastructure upgrades.  The improvements include speed and performance enhancements as well as a re-designed and responsive interface, ensuring a seamless user experience on any type of device.  Films On Demand provides access to more than 15,000 educational streaming media titles to the OCAD U community. 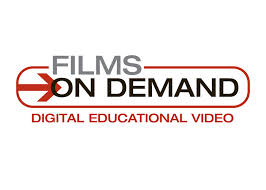